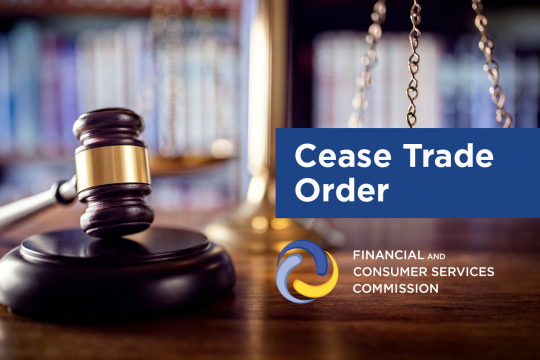 Permanent cease trade orders and market bans were issued against four respondents for violations of theSecurities Act. The orders were issued following two hearings both heard before the Financial and Consumer Services Tribunal on 21 October 2014.

The four respondents subject to the cease trade orders are as follows: Sachs International S.A. (Sachs), based in London, England and Charles King, a self-identified senior adviser with Sachs; and Stratus Financial Group International (Stratus), based in San Jose, Costa Rica and Ken Powers, a self-identified representative of Stratus. The Tribunal found in both cases that none of the Respondents were  registered to sell investments in New Brunswick.

The panel found that the Respondents appear to be a boiler room. Issuing a cease-trade order may help New Brunswickers from suffering losses to “boiler room” activity.

A boiler room is a type of fraudulent investment scheme where victims are contacted by telephone and encouraged to send money for the purpose of an investment. Victims are often told that they can expect large profits on their investment. The callers are persistent, use high pressure sales tactics and can be very convincing.

“Being an informed investor is the best defense against investment fraud,” said Jake van der Laan, director of the Enforcement division. “Before sending money, particularly out of country, it’s important to check registration of the person selling investments and ask questions. If an investment seems too good to be true, it usually is.”

An investigation into the activities of the respondents began after FCNB received complaints from two New Brunswick residents. One of the residents was cold-called by King, on behalf of Sachs International, about investing in gasoline/fuel futures (derivatives). The other was cold-called by Powers, on behalf of Stratus Financial Group about investing in heating oil contracts (a form of derivative).

The commission can provide registration information about someone who is registered to sell securities or provide investment advice in New Brunswick. The commission also provides educational materials about investment products. The public may contact the Commission at 506 658-3060 or 1 866 933-2222 (toll-free) to get further information, to make a complaint or to express other investment-related concerns. Tools and resources are available online.

The Financial and Consumer Services Commission has the mandate to protect consumers and enhance public confidence in the financial and consumer marketplace through the provision of regulatory and educational services. It is responsible for the administration and enforcement of provincial legislation that regulates the following sectors:  securities, insurance, pensions, credit unions, caisses populaires, trust and loan companies, co-operatives, and a wide range of other consumer legislation. It is an independent Crown corporation funded by the regulatory fees and assessments paid by the regulated sectors.